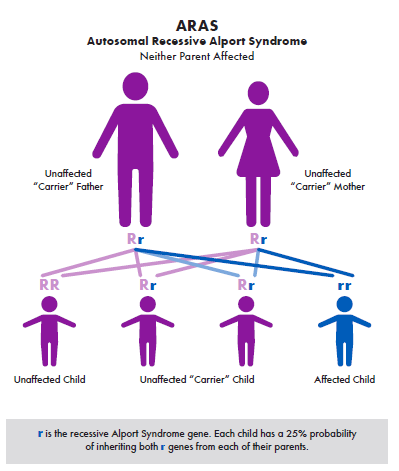 As discussed in the previous article in this series, Alport syndrome is caused by mutations in the type IV collagen genes. Type IV collagen is a family of six proteins, or chains, that are known as alpha-1 through alpha-6. Mutations that affect the alpha-3, alpha-4, and alpha-5 chains cause Alport syndrome. The alpha-3, 4, 5 chain is a major component of the basement membranes in the kidney, ears, and eyes.

The second most common form of Alport syndrome accounts for 15% of the cases and results from mutations of the alpha-3 or alpha-4 chain of type IV collagen (gene COL4A3 or COL4A4) and is called Autosomal Recessive Alport syndrome or ARAS.

Autosomal recessive disorders result when both copies of a gene are defective. Typically, each parent of a child with a recessive condition passes a mutant gene to the affected child. The genes COL4A3 and COL4A4 are located on chromosome 2. Each person has two copies of this chromosome, and two copies of both the COL4A3 and COL4A4 genes. The parents only have one mutation in one of the chromosomes and so they can have no symptoms or have some hematuria (blood in the urine). However, they will not have progression of the disease.

When each parent carries a mutation in COL4A3 or COL4A4, there is a 25% chance with every pregnancy that the child will have ARAS. Unlike X-linked Alport syndrome, the autosomal recessive type affects females just as severely as males. This is illustrated in the diagram above.

The least common form of Alport syndrome accounts for about 5% of the cases and results from mutations of the alpha-3 or alpha-4 chain of type IV collagen (gene COL4A3 or COL4A4) and is called Autosomal Dominant Alport syndrome or ADAS.

Each child of an affected parent has a 50% chance of inheriting the mutation and this is illustrated in the diagram above.